“If you’re looking for adventure, just spend a few minutes with 13-year-old Jacob. He has peered over the edge of the Grand Canyon, taken in the striking view atop Seattle’s Space Needle, and witnessed Yellowstone’s Old Faithful geyser shoot for the sky. Traveling with his own entourage, complete with high-tech wheelchair and medical equipment, hasn’t slowed Jacob down. He whizzed down alpine slides, basked on sunny beaches, fished in mountain streams, and has never met a roller coaster he didn’t like.” So reads the introduction to Jacob Mockbee, our Children’s Miracle Network Champion Child. 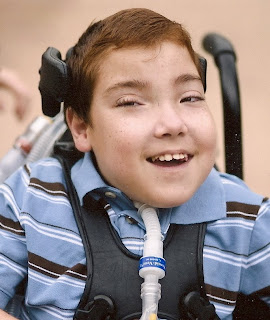 Jacob was chosen as Arizona’s champion for “Champions presented by Walmart and Sam’s Club, a Children’s Miracle Network Program” and the announcement made at the Marana Walmart yesterday. We could not be more proud or excited to have Jacob as our champion and ambassador for the Children’s Miracle Network, Tucson Medical Center and Arizona.  Jacob truly is an inspiration for all of us. Jacob’s zeal for life, his terrific sense of humor, his marvelous personality and concern for others are what really engage you when you meet this young man, not his wheelchair or the limitations that you might think Spina Bifida would have on a child.

Spina Bifida is a birth defect that affects 1 in 1000 births. Jacob was diagnosed with Spina Bifida prior to his birth and his family spent the time prior to his birth preparing for some of the medical treatments he would need. Along with Spina Bifida Jacob has other complications which together mean that Jacob is wheelchair bound and tube fed. After you learn a little about Jacob you realize that Jacob isn’t seeing ‘limitations’ of Spina Bifida, only opportunities and challenges to be met. At his sixth grade graduation he was awarded the “Jacob Mockbee” award. Named in his honor, this award recognized outstanding commitment to and hours spent serving his community. Jacob has also been named City of Tucson’s “Student of the Week”. Jacob speaks at fundraisers, on the radio, or on T.V. sharing his story and how Children’s Miracle Network and Tucson Medical Center have made such a difference in his life. Jacob’s life experience along with his sparkling personality makes him a fabulous spokesman drawing attention to a serious need within our community.

It is hard to imagine that with such zeal for life this young man has seen the inside of an operating theater more than 50 times, the first two surgeries when he was just six hours old. Jacob and his family have worked hard and drawn upon and collaborated with the experts at TMC to create this full life. Jacob has spent approximately two years of his thirteen years alive in hospital. The other eleven years have been about living life to the fullest often by giving back to the community. Well done Jacob. We’re so very proud of you and honored to have you as our Champion.

Champions is presented by Walmart and Sam’s Club, a Children’s Miracle Network program.

Posted by TMC for Children at 5:06 AM