Each Child, A Warrior - Nicole's Story

Many, if not all, of the children's stories we hear on the The Mountain of Miracles Radiothon tell of an incredible fighting spirit. Nicole's story as told by her family is the story of a warrior.
"Nicole is a very sweet, happy, smart, and sociable four year-old who loves her friends, family, and playing hard. The casual observer would never know what a warrior she is. 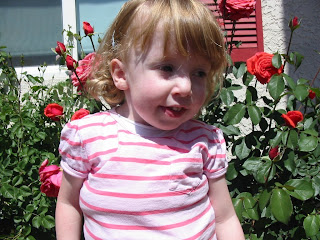 Before Nicole was even born, we knew she had a tough road ahead of her. When her mom was 19 weeks pregnant, Nicole was diagnosed with a congenital diaphragmatic hernia, a life-threatening condition that affects roughly 1 in 2500 babies. With this birth defect, the diaphragm fails to close, allowing the stomach and other abdominal organs to crowd the developing lungs. We also knew, though, that Nicole was one tough cookie, and so we named her Nicole, the root of which means to overcome. And that's what she's done. When she was four days old, Nicole had surgery to close her hernia and move her stomach, intestines, spleen, and part of her liver back where they belonged. She was almost three months old when she finally came home from the hospital. Nicole has had several challenges since then. She has severe reflux and Eosinophilic Esophagitis, making eating and swallowing difficult, so she uses a feeding tube while she's learning to eat. She receives therapy services to help her catch up with her speech and other skills. Her biggest challenge these days, however, is her severe scoliosis. After trying to control her worsening curves with a brace for over a year, she finally had to have extendable rods placed in her back. She has further surgery every six to ten months to extend those rods, and will until she's finished growing. Despite all of this, Nicole has a phenomenal attitude and bounces back a little faster every time. She amazes us with her genuinely grateful and fun spirit."
Posted by TMC for Children at 5:58 AM